An American Story in Concert

My Favorite Toy Was Dirt:

At The Door
Eve's Leaves 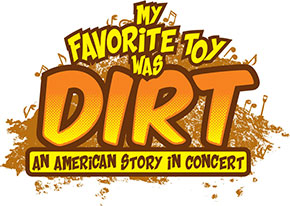 My Favorite Toy Was Dirt: An American Story in Concert is an original comedy written by Patrick F McManus and starring Tim Behrens vs. 7 Musicians

It is a kind of "Musical" McManus Comedy with music by Olivia Brownlee, and it is scored for 7 musicians Versus 1 actor.  Think Mark Twain meets Spike Jones.  Or the Marx Bros. meet Frank Zappa.  Or Peter and the Wolf on steroids where nobody dies in the end, not even the bears.

Bar and concessions, intermission will be around 8:20pm.

At The Door
Eve's Leaves